If Andrew Himes of Boonsboro could pick his dream job, it would definitely be related to baseball.

A baseball fan since elementary school, Andrew devotes countless hours to listening to the Baltimore Orioles on the radio in his room. His family doesn't have MASN, the cable channel that carries Orioles games.

He occasionally watches games on TV with his grandmother and in person. He once got to throw out the first pitch during the 2015 season.

That was the season after he had his 15th surgery, which was at Johns Hopkins Hospital in Baltimore.

The 18-year-old gets to as many Hagerstown Suns games as he can. This season, it was easier — he has been working for the team as a ticket scanner.

Diagnosed with Hurler syndrome when he was 1 1/2 years old, Andrew has had 20 surgeries, but he maintains an upbeat, positive attitude. At about 4 feet tall, he is shorter than most people his age, but he has the spirit of a giant.

Hurler syndrome is a rare, inherited disease of the metabolism, preventing a person from breaking down long chains of sugar molecules called glycosaminoglycans. It belongs to a group of diseases called mucopolysaccharidoses or MPS, according to online medical references.

Andrew, the son of Jeff and Anne Himes, was the 20th child with Hurler syndrome to have a bone-marrow transplant at Duke University. He had that before his second birthday.

Without the transplant, Andrew had a life expectancy of three to 10 years, Jeff Himes said in a 2014 Herald-Mail story.

Andrew is a client of the Maryland Division of Rehabilitation Services (DORS), which provides funding to pay him.

He is one of 47 students gaining summer work experience through DORS and the Western Maryland Consortium, which provides workforce development services residents in the region. Longtime employers working with the program include the Washington County Board of Education and Boys & Girls Club of Washington County.

Lori Thomas, a career counselor for youth department at the Western Maryland Consortium, is committed to finding work experiences that match students' interests. After meeting with Andrew, she knew the Hagerstown Suns was the place for him.

"Andrew is an absolute dynamo. He is full of energy. ... Andrew knows anything and everything about baseball," Thomas said.

Ross Combs, the director of sales for the Hagerstown Suns, was taken aback by Andrew's confidence when he came to a Suns game early in the season and said he was going to work for Combs. Andrew hadn't been hired yet.

But, sure enough, two weeks later, Andrew was on the Suns' staff, learning how to work the ticket scanner and greet fans.

Combs is a believer now.

"Andrew's energy is infectious. ... He's done a great job, working hard, and we just appreciate him coming in with a smile on his face telling everybody, 'Enjoy the ballgame,'" Combs said.

Combs initially scheduled Andrew on slower nights, but he has since put him on busier nights, like Thirsty Thursdays. It gives him a paycheck.

"I get more money. ... I'm helpful here," said Andrew, who likes that he's meeting more people through his job.

He likes the playful banter back and forth with other Suns employees, including Anthony Holmes, also known as "Big Tony."

"I can whistle like Big Tony, but not as loud," Andrew said.

The Washington County Human Development Council provides a job coach, who drives Andrew one way to work. Job coach John Staubs is on hand to help him if Andrew has any trouble during his shift, mainly with the handheld ticket scanner.

After most fans are through the front gate, Andrew stays to watch the game.

Andrew will continue his education at Boonsboro High School, where he's an athlete with the Unified Sports program and is a cheerleader.

Despite all of the rainouts this season, Andrew didn't let the weather dampen his spirits, Thomas said.

Andrew hopes to work for the Hagerstown Suns next season.

"I really like seeing him get out and have job experience," Anne Himes said. "I'm also glad the public gets to see children with disabilities in jobs they wouldn't normally see them doing ... to see they can do jobs, too. For him, he's learning what's expected in a job and job responsibilities."

Read this story on Herald Mail. 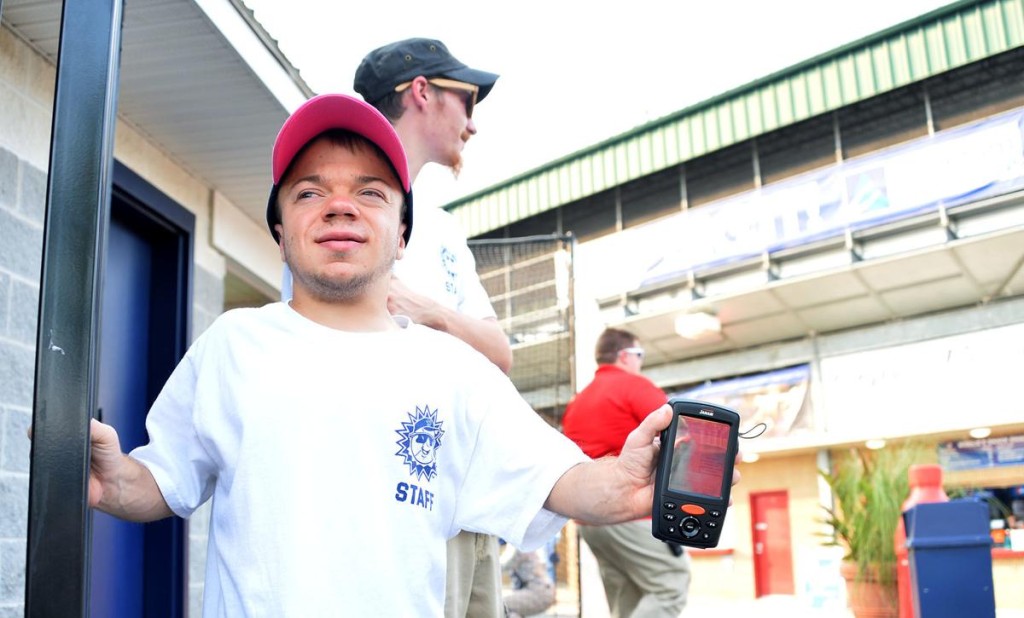 This Herald-Mail photo shows Andrew Himes, a Western Maryland Consortium client, working with at Municipal Stadium with the Hagerstown Suns.